CONNECT WITH US ON SOCIAL MEDIA!

Amazing Adventures is the SIEGE Engine multi-genre rules set that allows
you to engage in any kind of adventure, in any genre or story style you like!

100% compatible with Castles & Crusades, this core rulebook contains everything you need to play in any world you like.

What is Amazing Adventures?

Amazing Adventures is the SIEGE Engine multi-genre rules set that allows you to engage in any kind of adventure, in any genre or story style you like!

100% compatible with Castles & Crusades, this core rulebook contains everything you need to play in any world you like.

Alternately, combine it with C&C to take your fantasy game to the next level, with new character classes, alternate takes on magic, horror, super science, superpowers, and even full official psionics rules for the SIEGE Engine! 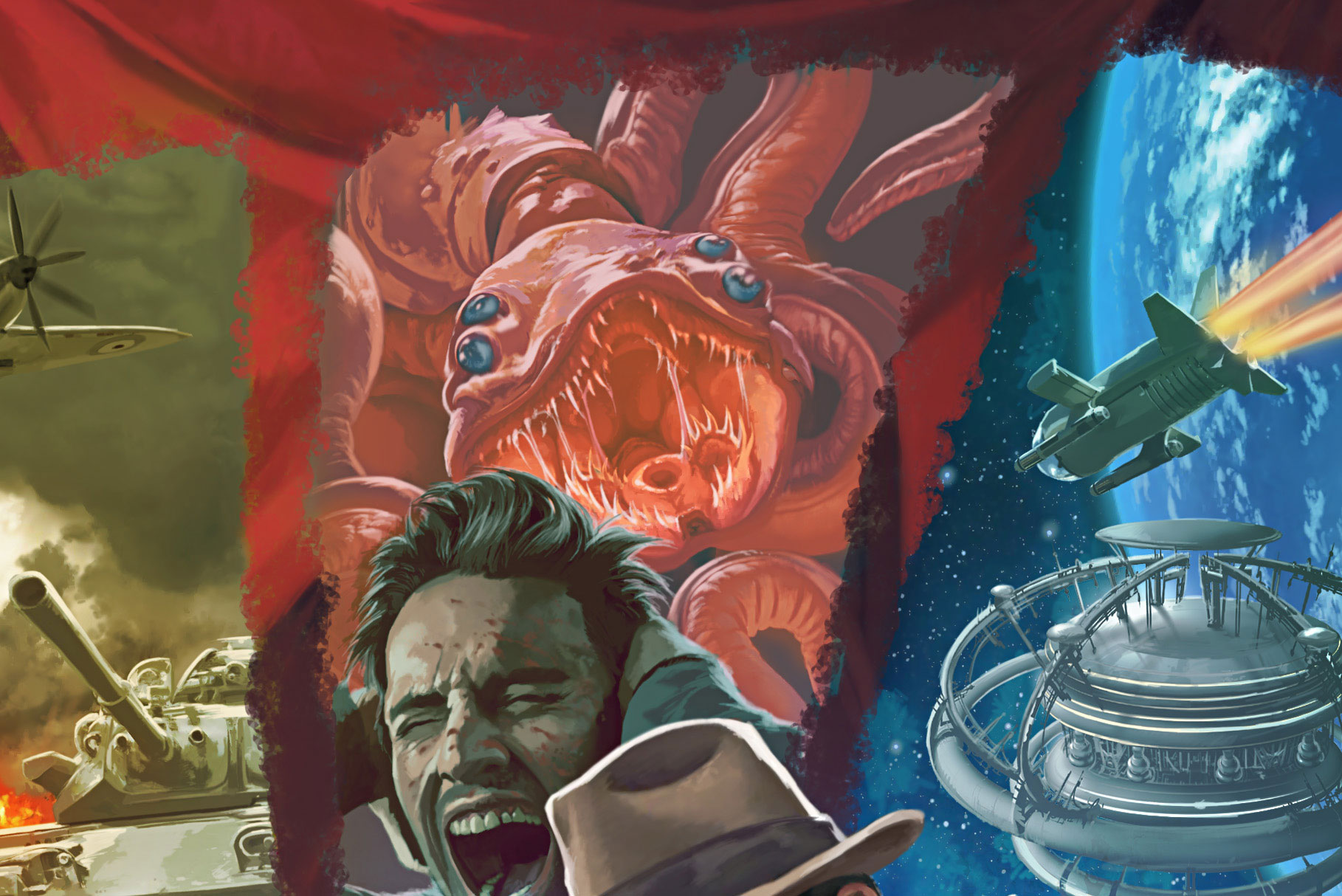 Amazing Adventures is an RPG of super science, sorcery, pugilistic pummeling, gun-toting, sword-wielding, starfighter-flying, tomb-raiding, hard-boiled adventure! Whether your game is set in the pulp era of the 1920's, through 50's, the modern era of urban fantasy and horror, or a futuristic game of space opera action, Amazing Adventures will get you there!

The game contains complete rules to create and run games, character creation, combat, secret societies, a rogue's gallery and bestiary, a fast-playing and simple attribute check system that allows the game master and player to pummel any challenge to a pulp, plus a complete introductory adventure! Best of all, the system will look familiar to all players of classic role playing games, so that you can be up and running in minutes.

What’s In the Book?

Within these pages you will find:

• 8 new character classes, including the adventuring archaeologist Raider, the hard-boiled Gumshoe, the seductive socialite, the rough-and-tumble Pugilist, the mysterious Mentalist, and the brilliant Gadgeteer
• Generic Class Abilities, which allow you to customize your character by swapping out core abilities with things like medicine, ace piloting, two-fisted fighting, and more
• Complete psionics rules
• Fast-playing firearms rules that blend simulationism with two-fisted action
• Vehicle combat and chase rules
• A simple and intuitive gadget creation system which makes use of spells to function as super-science items
• An optional sanity system for injecting mind-blasting cosmic horror into your games!
• A new take on magic which allows greater flexibility in spellcasting
• Fate Points, which give players a greater option for over-the-top heroics.
• An optional sanity system which allows for Lovecraftian horror elements in your game
• A complete bestiary and a full introductory adventure to get you started
• Guidelines for creating power groups and secret societies to flesh out your campaign world
• And more!

Entire multiverses of adventure and excitement await. Are you bold enough to seize the reins?

How does it work?

Almost everything you do in Amazing Adventures revolves around an attribute, or SIEGE check. Your character has six attributes, representing their physical and mental aptitudes and abilities.

These attributes are the same ones most players familiar with d20-based role playing games recognize: Strength, Dexterity, Constitution, Intelligence, Wisdom, and Charisma.

Each of these attributes is rated from 3-18 with a corresponding bonus. 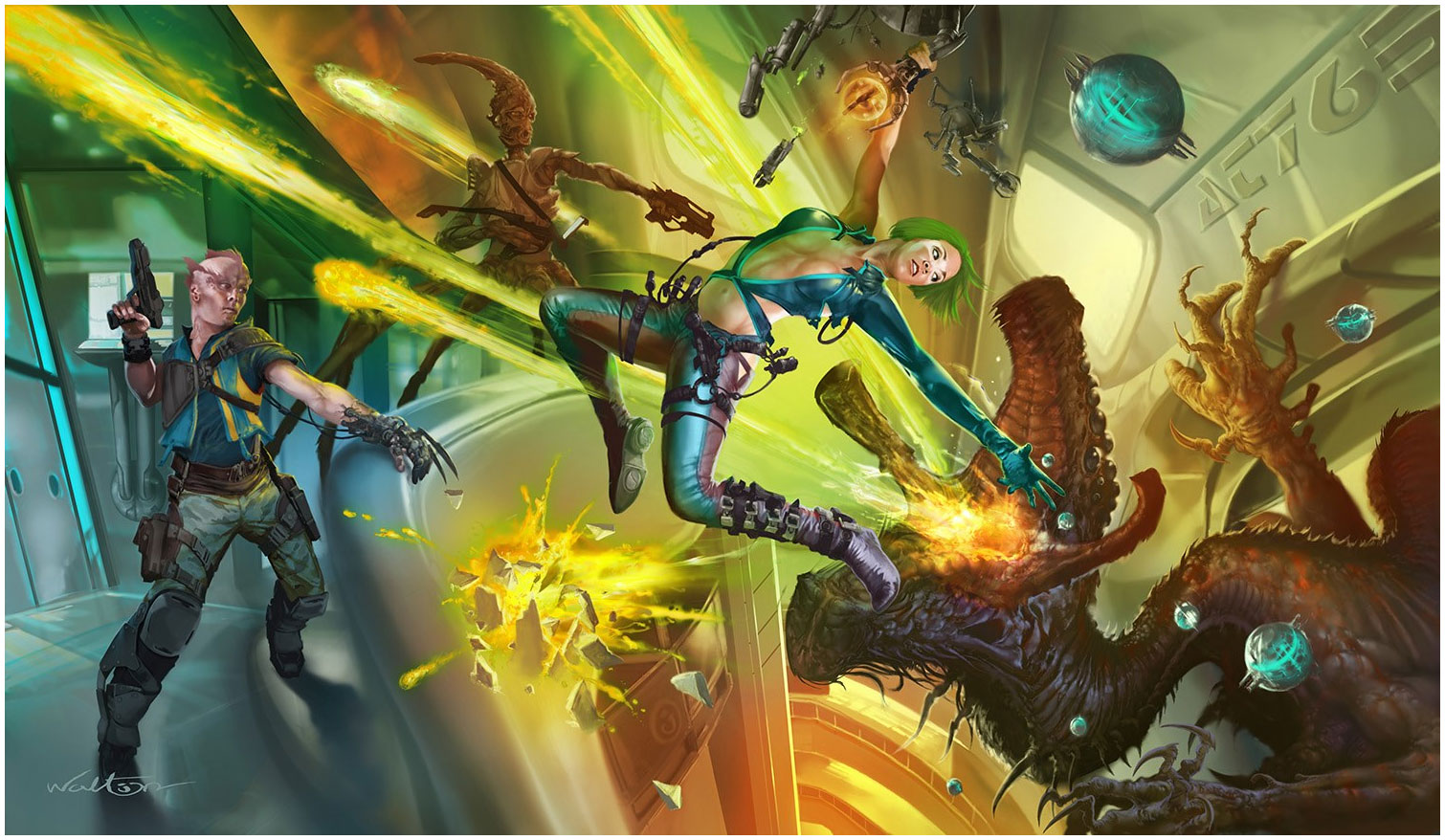 As mentioned before, the distinction between primary and secondary attributes is important. Almost all non-combat actions (for which the Game Master deems a roll is necessary to determine success or failure) are resolved by an attribute check, or SIEGE check. To make a SIEGE check, a character rolls a d20, adds any relevant bonuses (usually character level and ability bonus), and attempts to equal or better a Challenge Class, or CC.

The CC is determined by adding the Challenge Base (CB) to a Challenge Level (CL) determined by the GM. Generally speaking, the CL will combine the hit dice or level of the opponent with any situational bonuses or penalties the GM feels appropriate.

For example, if Natalya the Fox is trying to slip past the sentries at a Nazi-fortified camp, she makes a Dexterity check for her Move Silently class ability. Since Dexterity is a Prime attribute for Hooligans, her Challenge Base for the check is 12. Let’s say that the Nazis have an average of 4 Hit Dice, that means the CL for the check is 4. Adding 12+4 gives us 16 for the final Challenge Class; Natalya needs a 16 or better on her Dexterity check to slip unnoticed past the guards.

Amazing Adventures brings a number of unique features to the table, all of which are intended to bring a high adventure flavor to modern role playing, from player agency to wild car chases through crowded city streets.

Here’s a few peeks at the unique mechanics it has to offer.

Fate Points are a mechanic that provides characters with the means to affect game play in small, but significant ways.

They represent the actions of cinematic heroes, who always seem to make those dramatic comebacks, have sudden flashes of insight just in time, or call upon inner reserves of strength to fell the villain just when things look grim. 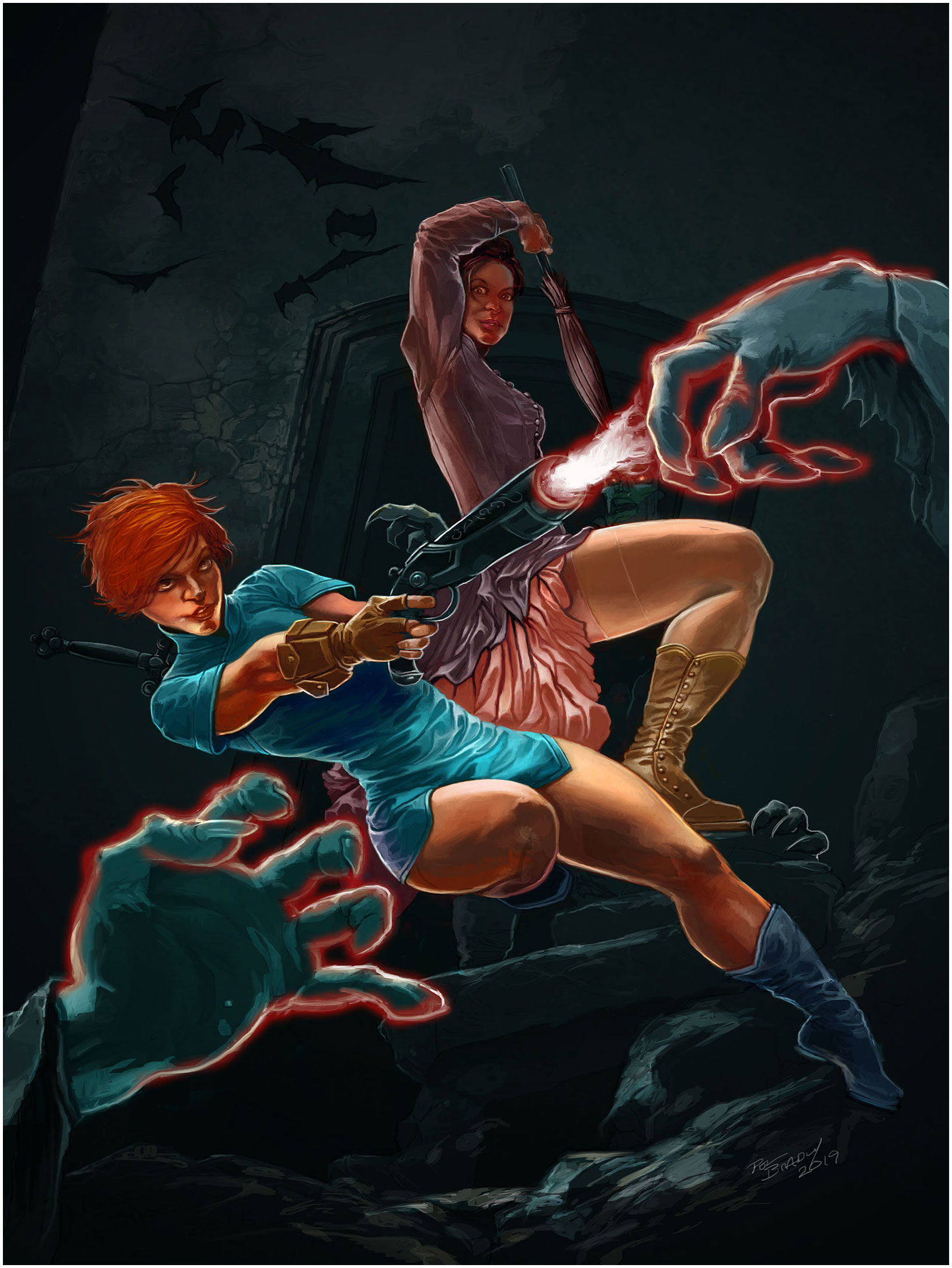 A character always has a limited amount of Fate Points, and while the character replenishes this supply with every new level he or she attains, the rate of attrition can far outstrip the rate of gain. As such, players must use them wisely. A character can spend Fate Points to do any of these things:

• Fortune’s Favor: alter a single d20 roll used to make an attack, attribute check, level check, or a saving throw.
• Mighty Blow: make a single, earth-shattering attack which also stands a chance of smashing the character’s weapon.
• You Missed!: Avoid an attack.
• Just Made It!: Automatically succeed at a saving throw.
• Second Wind: Recover lost hit points.
• Sound the Charge!: Double the character’s movement for the round.
• Down But Not Out: avoid death when reduced to below -10 Hit Points
• Providence Smiles: gain a Plot Break

Combat between two vehicles works exactly the same as combat between two characters. A vehicle has Dexterity and Constitution scores, and AC and Hit Points, just like characters do. Vehicles also have a fourth Attribute, Speed. A vehicle’s Speed (Spd) attribute works exactly like a Player Character Attribute, using the same table for bonuses and penalties. It’s a rough representation of the real-world speed comparison between any two vehicles. It’s not a direct conversion of actual miles-per-hour. If you really need to find out the mph (or kph, in Europe) of a vehicle, a web search should fix you up, fine. It shouldn’t be necessary for this game.

Most tasks in vehicular combat are going to be resolved with Dexterity rolls by the driver or pilot of the vehicle. When piloting a vehicle, a character uses either his Dexterity score or the vehicle’s, whichever is higher. However, if the vehicle has a negative Dexterity score, this negative acts as a penalty to the character’s Dex. Combat proceeds between two vehicles exactly as in normal combat, rolling a d10 and adding Dex bonus for initiative, and using d20 and Dexterity for ranged attacks from the weapon. In this manner, player characters can interact seamlessly with vehicle combat. Remember, the pilot of a vehicle uses his Dexterity score or the vehicle’s, whichever is higher.

Firearms are listed with a rate of fire (RoF): 1, 2, or 3. Some are designated Automatic (A). Weapons may fire one projectile per rate of fire, per attack; however, additional shots suffer a cumulative recoil penalty indicated as the weapon’s “Rec.”

Fully automatic weapons may fire in bursts of 3, 5, 10, or 50 shots, imparting bonuses or creating an area effect attack, with the potential for more than one bullet to strike a target, based on how high the attack roll is, and any applicable saving throw made by the targets (in the case of an area of effect “spraying” attack).